From NextJS to Astro

In April 2022, I have decided to remove JavaScript from my own personal website (yes, the one you're on right now). This does not mean I had to not use a single line of the web programming language, but that I had to make my website work without the need of a client-side, SPA framework. A few reasons might come in mind for this:

Why use server-side web frameworks?
Reducing client load time by not loading a rendering framework
Reducing data usage by sending as little as possible
Making a website instead of a web app
Making a website that can function without JavaScript
Reducing development chores by removing dependencies

At that point, I knew I had to either use a tried and tested static generator or cutting edge web frameworks. I couldn't find the first option very welcoming, as I was aware that the classig SSG approach involved either using programming languages different from JavaScript or templating engines with their own syntax and, for all its worth and React controversy, JSX feels pretty natural right now.

So I looked into the second solution. But while I was only learning to navigate the Deno 🦕 space, I wasn't ready to jump ship into the complete unknown in production (no harm meant for Deno, I think it's great and has the potential of being a major part in the ecosystem, through its security and compatibility with the browser). That left me with going to the extreme landscape edge, straight to Remix, Marko or Astro, all which I thought could cover my needs and more. I have to be honest, I actually got on the Remix hype train, gave it a try, experimenteed locally and ... didn't get it. It felt unpolished, over-engineered (yes, a hot take) and very capable of amazing things ... in the future. For me, and especially for this endless blog-like project, this was not needed. What I actually wanted was not a hyperactive edge server, but:

So I had to let Remix go, but I promise 🙏 I'll come back for the next project. I just have to test those error boundaries better (yes, I think that's a great feature and I am aware it's in React since v16, but it wasn't promoted to its capabilities, which Remix actually does).

I had, in my endless choice, to pick between Marko and Astro, and the third criteria, along with the native <Markdown /> component, made all the difference. Astro is a beta-level open-source framework (it was pre-beta when I started tinkering with it) and it feels, among others, unstable. The docs are lately out of date, with conflicting instructions because they cover multiple versions, and a few things are just in the plans, not in the works (like a stable <Image /> component that uses build-time magic and still works without JavaScript). But enough with the negative, let's see why I actually switched.

First of all, it has markdown, remark and components in markdown as first-class citizens, and that is a core part of a simple blog. I just migrated my remark-rehype plugin settings into the Astro configuration and it was haflway ready to be used. The other half is the second advantage, easy Tailwind integration (and later Tailwind as a favored integration through the @astrojs/tailwind). Third reason, their data interpolation syntax is as close you can get to JSX without being JSX, but wait, it gets better, you use plain HTML attributes, so no more className 🎉 or camel-case shenanigans. This is actually the hardest part in the migration from NextJS to Astro: renaming the messed up attributes in React components into normal HTML. Talking about that, Astro supports components from major frontend frameworls (React, Vue, Angular, Preact, Svelte), but I have discovered that their plain .astro components, which can use build time data and have no client-side JavaScript, were all I actually needed. And if I ever need something that is dynamic and needs state management, I can use their island architecture and client-side loading directives to delay the loading of any fancy framework.

That being said, the migration felt easy, but had a few hurdles. I had to let go of the communication form whose backend was also managed by NextJS and of the page loading animation, because pages are not loaded now, you actually navigate to a new HTML document. And I had to make a decision: do I change my design and remove the experience section tabs on the homepage or do I integrate React on the homepage just to use react-tabs? I actually did neither and wrote a fully accessible tabs implementation in 60 lines. It's simple and achieves feature parity with react-tabs if I use it on a single table (I won't code in extensibility into the code unless I needed). More than this, the <script> is only loaded with the component and could be bundled, if I decided to. Finally, I added a small script that is loaded on every page to manage the light-dark theme preference (based on my choice that dark mode should be default on my website, but I can offer the light theme option on the blog) and another one for the theme switcher button in the navigation bar. And that was pretty much the transition (if I were to forget with my experiemnts with astro-imagetools and tailwind typography which I abandoned by the end).

In the end, I was completely delighted with the results. As you can see in the Lighthouse comparison below, the overall performance increased by 13 points, to 99, I shaved 200ms from the blocking time and halved the time-to-interactive to 1.4s. 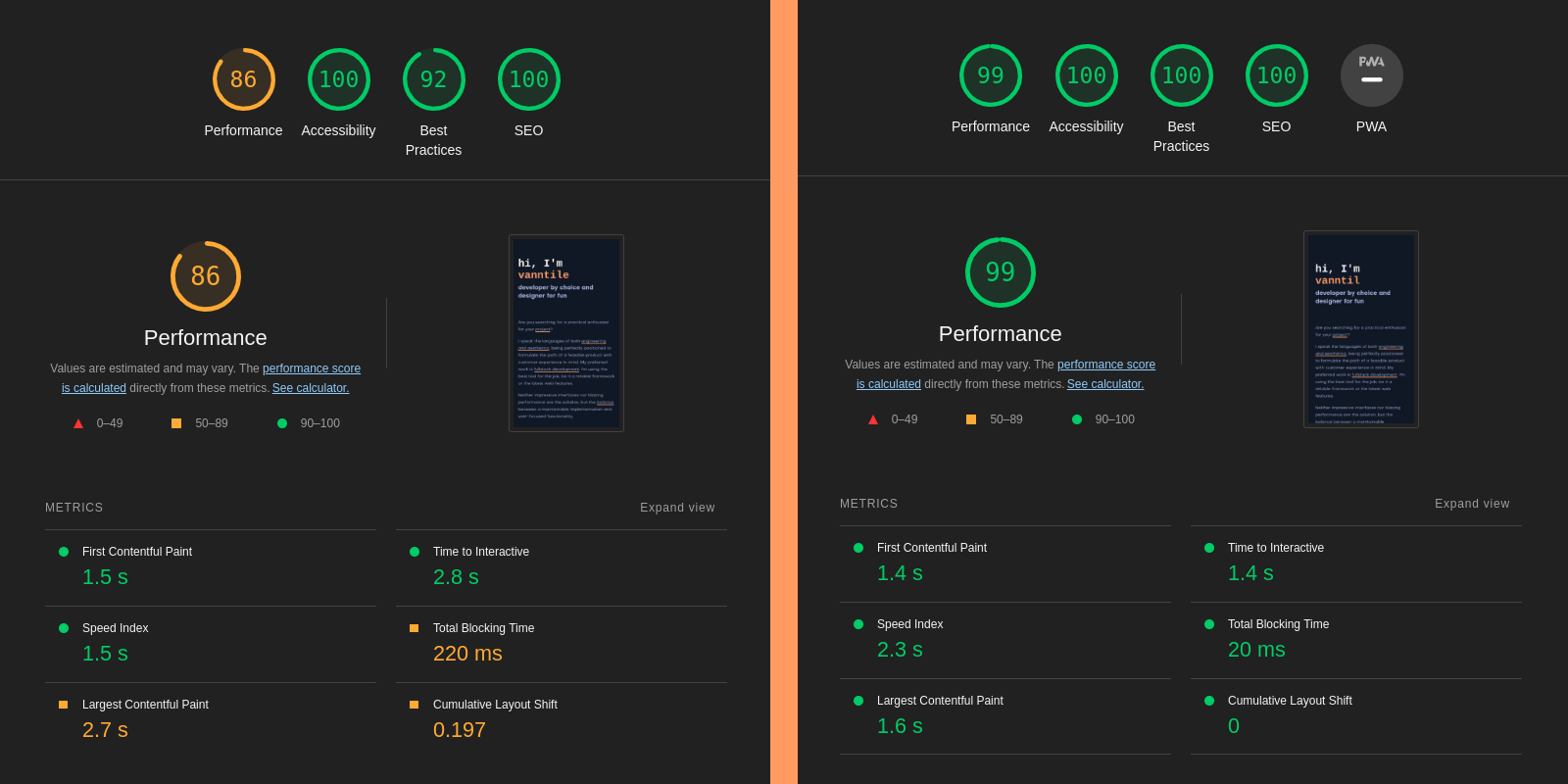 The above are measured in the deployed versions, on the mobile test. To be honest, part of the difference is the simultaneous transition to render.com from Heroku. But to add some hard numbers to the above stats, the NextJS version was loading initially 184kB (435kB of data), while the improved Astro version is only 68kB (143kB data), which is a 65% network usage reduction. So the Lighthouse test must be getting something out of this reduction. This is not to say that Next is bad, but that I am not in need of their offering (although I miss their <Image /> component).

At the time of writing this article, Astro is at the 12th beta version and has decided on a stable API, while launching SSR and their first hackathon for v1.0. I currently am excited for their future and can't wait to see where this community will end up with. The ability to integrate component frameworks seems crucial to me, but building things in their own way will be what pushes them forward.